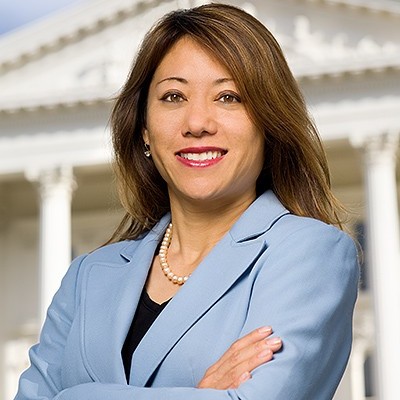 Join us on October 4 with Fiona Ma, ECDC-Endorsed candidate for Board of Equalization and former California Assembly-member.

Purchase tickets via PayPal on the ECDC website. Or mail us a check at El Cerrito Democratic Club, PO Box 192, El Cerrito, CA 94530. $40 per person.

Fiona Ma was elected to represent the people of California’s 12th Assembly District from November 2006 to November 2012 (after serving the maximum of three terms.) She was the #112th woman to ever be elected to the California Legislature and the first Asian woman to serve as Speaker pro Tempore since 1850.

Assemblywoman Ma first became interested in politics as a small business owner and a Certified Public Accountant advocating on behalf of other small businesses. She was an elected delegate to the White House Conference on Small Business under President Bill Clinton, which produced a report to Congress on the 60 top policy recommendations to help small businesses grow and prosper in the 21st century.

She formally entered the field of politics in 1995, serving as a part-time district representative for the former President pro Tempore of the California Senate, John Burton. It was a position that would last for seven years, after which she was elected to the San Francisco Board of Supervisors, where she served for four years until 2006. During her tenure on the Board of Supervisors, she authored the landmark Local Business Enterprise ordinance on behalf of women and minority business owners and passed legislation to tackle human trafficking.

While serving in the Assembly, in addition to NCSL, Fiona served as Western States Chair of Women in Government; was an Executive Board Member of the California Democratic Party; and is Member of the Aspen Institute’s 2009 Class of Aspen-Rodel Fellows.

She is currently on the Board of CA Women Lead; Board of Directors for Curry Without Worry;  Board of Directors of Asian Inc; President of the Asian American Donor Program Honorary Chair and Spokesperson of the San Francisco Hep B Free Campaign; and Honorary California Chair of the New Leaders Council. She serves on the Advisory Boards of the James L. Brady Riding Program for Children with Disabilities, Family Connections, Alliance for Girls and the SF Ethnic Dance Festival.  She is also a member of the Screen Actors Guild.