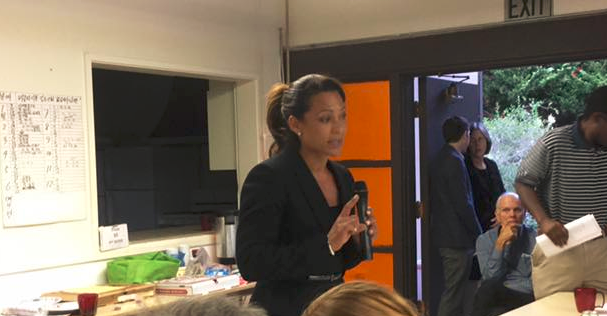 Our main presentation was by Aimee Allison, Senior Vice-President of PowerPac+.  PowerPac+ is an organization working, through its Democracy in Color Campaign,  to maximize voter registration and turnout among people of color.  As people of color become the majority of American citizens, our politics have to evolve to engage them and express their progressive aspirations.Ms Allison’s upcoming book isShe the People: The New Politics of Women of Color,to be published by Justice Matters Press (September 2016).

Ms. Allison began her presentation by telling us about a trip she took through the south with Steven Phillips, the founder of PowerPac+.  Listening to people of color, hearing about their struggles to participate in the political process of their cities, gave her a concrete understanding of how important it is to organize in their communities.

After that trip, she agreed that to make the change needed in this country, we can no longer allow the Democratic party to keep appeasing the mythical “white swing voter.”  There is an emerging progressive majority in the United States.  Progressive white people and progressive people of color make up 51% of American voters.

Census data and exit polling from 2012 tells us we are looking at political majority in the United States.  We have a New American Majority – 51% of voting population nationally is made up of progressive people of color who are 89% of voters of color, and progressive whites who are 39% of white voters.

The media promulgates one theory of why Democrats don’t win – that we have lost the white working class, blue collar so-called swing voters who have deserted the Democratic party because of their racism, homophobia, and entrenched attachment to religion.  But that ignores the vast numbers of people who voted for Barack Obama, not just in 2008 but in 2012, who stay home during midterm elections and don’t vote down the whole ballot.

David Axelrod, in his book Believer, and Sen. Charles Schumer, have both stated that the Democrats lost after the Affordable Care Act (Obamacare) was passed because working class whites saw it as a giveaway to minorities. Both of them believe that in order to win, Democrats have to back off of health care!

This is 100% wrong and based on the assumption that President Obama was an outlier, a surfer who could ride the wave of a certain set of circumstances and a one time popularity contest.  But Barack Obama is NOT an outlier – he’s an expression of what’s happening in the country.

Other data show that at the highest levels, through the delegate structure, fundraising mechanisms, large national committees such as the DNC, DCCC and DSCC, and large institutions like unions, there is a conviction that negative ads will convince the white swing voter to vote Democratic. They don’t target the New American Majority in their ads.  As a matter of fact, most voters in the New American Majority don’t believe that ads and bulk mail are particularly relevant to them.

The best way to reach progressive voters is to talk to them in person.  The most effective way to use the vast sums of money spent on campaigns is on field campaigns.

We need to get this THIS YEAR.  If Clinton and Trump is the matchup – which at this writing looks likely – we can’t make the mistake that the Republicans made and count on Trump to be too outrageous, too ridiculous, to be President.  That’s what the Republican elites thought, and yet, in state after state he proved that thousands or millions of voters responded to his message.

We need a sure and deep understanding of who votes and who stays home, and we must make sure our voters vote!  Otherwise, we could lose, and the consequences would be devastating.

Much of Ms. Allison’s presentation relied on information in Brown is the New White, a book by Steven Phillips that is now on the New York Times bestseller list.  It is a data-driven book including important census information, such as that every day 7,000 People of Color and 1,000 whites are added to the population.  The majority of 5 year olds are people of color.  Since we have a New American Majority at the national level – what will it take for us to think about winning? Consider that Black women are the most loyal and highest turnout for Democrats – more than 80% of female Black voters vote for Democrats.  So why are people of color, a uniquely reliable voting sector, nonetheless  an afterthought in electoral strategy?

So much campaign funding is spent on negative TV ads; but negative ads don’t inspire people to go to the polls.  For example, in Senator Kay Hagen’s race for re-election in 2014, $19 million was allocated to TV ads.  That amount could have been used to hire 400 field canvassers for a year, going door to door, registering voters, and getting them to the polls.  Imagine that each canvasser convinced just 3 people to vote for Kay Hagen in 2014. Instead of losing by 48,000 votes, she would have won by 12,000.

PowerPac+ is trying to influence the decisions about how resources will be used in 2016. The book Brown is the New White is one important tool for this, as Ms. Allison’s forthcoming title also will be.

These are important ideas for us to think about as we organize our El Cerrito Democratic Club election year activities.  In the past, we have done a “lit drop” where we leave our slate card information at the doors of frequent-Democratic and decline-to-state voters.  But since the majority of California Democrats  are already people of color, we need to organize ourselves from the assumption that we can inspire them to get to the polls and vote, not just for the Democratic presidential candidate, but down the ticket for all of our endorsed candidates.

This is an opportunity for us to explore what a real progressive agenda would be like, and to use our experience to show that an aggressive field campaign, based on face to face interaction with voters, is more effective than just dropping literature, sending mail, or running TV ads.

We can’t give up our greatest hope we have about the change we want in this country when Trump is talking about rounding up Mexicans and Muslims!  We don’t need moderates to win.  It’s because we have the beginnings of a progressive majority in our state legislature that we could raise the minimum wage in the whole state.  That’s just the tip of the iceberg of what’s possible.

Since Latinos in California and nationally have largest voter-eligible population, we need to fund outreach to Latinos – not ads on Univision, but face to face outreach.  The DCCC and some other donor groupings, such as Democracy Alliance, are funding large multi-state efforts.  However, since 97% of political consulting and polling firms have white people as principals, there is a dearth of messaging and strategy that engages people of color on a visceral level.

Our members had great questions and comments. I think everyone who attended left enthusiastic about our upcoming season and how we can put the ideas we heard into practice.